Baby B goes for a jog 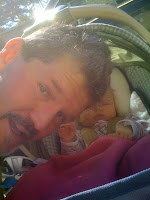 I try to run anywhere from 12-15 miles per week. That's a lot for this old man Daddy K. I've even improved my average mile time to almost 9 minutes, down from over 10-minute miles a year ago.

But nothing prepared me for today's first: taking Bea for a jog in our fancy schmancy Baby Trend Expedition LX Jogging Stroller. Certainly not the top of the line, but still a sweet ride nonetheless.

Totally different ballgame pushing the jogging stroller with a baby in it while jogging. We've walked a lot with it, but this is the first time I ran with it. One thing I learned very quickly was to keep one arm free to swing naturally as you'd do running usually, and just rotate each arm every so often. That made the ensuing miles much more palatable jogging the rich rocking tunes of Rush, Genesis, Ted Nugent, Foghat, Van Halen, The Cult and many more newer kids as well – love my iPod random shuffle. (Bea will grow up knowing what it means to rock.)

Baby B was find 'cause she just enjoyed the ride the whole time – predominantly napping. I had my fanny pack strapped to my belly with cell phone for those just-in-case moments, which there were none. I made it over 4 miles, but mercy was that a trek. Great workout, though.

I'm thinking of starting a fun 5K and 10K Get Off the Ground running/fundraising event for daddies with babies and jogging strollers.

Where should the proceeds go? The Make-A-Wish Foundation? The March of Dimes? The America Red Cross? Youth fitness and sports?

What do you think?

Daddy K says think about the kids; finance an AIDS clinic, or a youth center, or GM 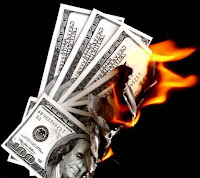 Earlier this week I was working out in the family home gym (garage), half-listening to the Today Show talk about the business of high-end prostitution (got the title though, didn't I).

I belong to the church of pull-yourself-up-by-your-bootstraps and the holy personal-responsibility redeemer. So when I heard the reporter talk about how in a world gone bell up financially, men in power (and I'm sure some women as well) continue to finance prostitution, making it boom during a bust.

Because it makes them feel better about themselves – for lighting piles of money on fire. Our money.

It makes them feel better about themselves. Really. I've done a lot of borderline things over the years to make myself feel better about me – I ain't no angel – but that was mostly prior to being married (again) and prior to having a daughter, the game-changer.

According to an informal survey conducted by an Internet site for men who hire escorts found that 49 percent are married, 40 percent have an income of more than $100,000 and 38 percent hold a graduate degree.

Again, I don't have a problem with sex and I'm not naïve when it comes to the big business of adult entertainment. I just don't understand how married men in power who have children can rationalize that spending $25,000 for a weekend with a beautiful woman for sex and fake romance will make the boo-boos go away.

Put a frickin' band-aid on it and donate to an AIDS clinic, or a youth center, or GM. Keep Saturn alive for God's sake. We're a Saturn family that buys stuff and loads up the VUE, helping the economy when we can.

Seriously, there are many other positive ways to make yourself feel better while making a difference in the lives around you. 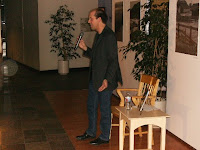 Last night we went to see a friend and colleague give a presentation about his newly published book Route 66 Railway at the Steinbeck Center in Salinas. This has definitely been a labor of love for him – a culmination of years of travel, stellar photography and insightful writing – and anyone who loves the railroad, old west, Route 66 and any combination of the three should buy the book.

We had the opportunity to take our own road trip through the southwest back in May of 2007. We drove along historic Route 66 via Seligman, AZ, and stopped at the infamous Sno Cap Drive-in and Angel Delgadillo's old barbershop and now gift store run by his family. This is one of 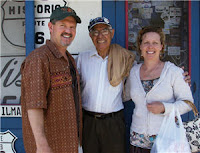 many stops along Route 66 featured in my friend's book. Angel was such a gracious man and was thrilled to hear that Elrond's book would someday be a reality. He even showed me the picture Elrond (the author/photographer) took of him the summer before. Good times!

During the Q&A following the book presentation last night, I asked Elrond out of all the ghosts of old Americana he came across during his photography travels, what were the most haunting.

What he said hit home with me. "Well, I would say that too many people today focus on their destinations, and not on the traveler experience. Everything in between is forgotten."

I'm paraphrasing a bit, but it was something like that. I couldn't agree more. His family joined him, his daughter in particular, on many of his adventures throughout the southwest, and they reveled in every moment of their journeys.

Just like the vacationing families of 50+ years ago who traversed the long stretches of tarmac from Chicago to Santa Monica, and all points in between. They knew where and how to get their kicks.

Amy and I always revel in the traveler experience, and we can't wait to show our baby daughter the road less traveled. Hey, we took her to Salinas last night.

Recently on some news radio show, I heard that women may be dirtier than men – i.e., they have more strains of bacteria on their skin than men do.

I was floored. I had to pull over and hyperventilate. Actually that was because I had arrived at work and had to go inside. And work.

I'm not sure if the sugar-and-spice myth is cross-cultural, but this anthropology minor has always been fascinated by it. Growing up, girls were ethereal and angelic. Even the anomalies of tom boys fell into a "not of this world" category. Anatomically speaking, girls were as seamless and smooth as the Barbie's we observed with scientific fascination (while we giggled obsessively at the curves and valleys).

Bathrooms were for boys to do their dirty business, but solely for the beautification of girls. In fact, I believed the rumor that public women's restrooms in restaurants, hotels and elsewhere were nothing more than elegant buffets and glittery lounges with eunuchs swinging feather fans.

Even when I grew up and lived with women, the illusion remained. The greatest magicians of today and yesterday (predominantly men) have nothing on the female sleight of hand.

Pregnancy pulled the curtain back a bit, but it was always me who left the bathroom shamed, odiferous air wafting after me like the guilt from a night of nacho/beer binging.

But now that I have a baby daughter, I know the devastating truth. It was horrifying at first, the stark reality slapping me across the face multiple times each day. I couldn't eat or sleep for weeks.

I'm better now; this book has been a Godsend.

Email ThisBlogThis!Share to TwitterShare to FacebookShare to Pinterest
Links to this post
Labels: baby girls, poop, pregancy, sugar and spice

I’m a loser baby, so why don’t you hug me 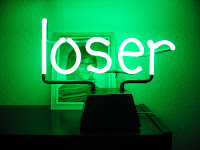 John McCain gave an eloquent and gracious concession speech this week, and while I'm a Barack Obama supporter and part of the "yes we can" daddies-for-change bandwagon (imagine what that looked like), I know John McCain loves his country and truly believed he was the right person for the job.

But he lost. Decidedly.

How does one deal with that kind of loss at that level? Or any level? More specifically, how does a dad deal with loss and his family? We talk a lot about helping our children deal with losing, as Daddy Clay at DadLabs did recently, but what about the dads?

Whether it's losing the presidential election (kinda high-profile), or struggling families whose fathers (and mothers) are losing their jobs, or losing their homes, or divorcing, or losing one of their children, or losing the big company softball game, or no matter where the loss falls on the spectrum – how do we cope with our families and children?

I've never had a child until now, but one thing I remember clearly was the open communication my mother had with me when she divorced my father. That was key. My early experiences with daddies weren't so hot, so Mom was the provider and caretaker for a few years.

But when my later father (adopting step-father) suffered one physical loss after another, his courage and strength and "fighting back for life" overshadowed any sense of loss any of us felt for him. No anger or depression or withdrawal or chemical dependence. Just straight ahead "you can't keep me down" marching orders. That's inspiring.

Most of us have some knowledge of psychiatrist Kübler-Ross's proposed stages of grief:

Denial: "This can't be happening to me."

Anger: "Why is this happening? Who is to blame?"

Depression: "I'm too sad to do anything."

Acceptance: "I'm at peace with what is going to happen/has happened."

What I didn't know was that Kübler-Ross herself never intended for these stages to be a rigid framework that applies to everyone who mourns (and of course that makes sense). I just read that in her last book before her death in 2004, she said of the five stages, "They were never meant to help tuck messy emotions into neat packages. They are responses to loss that many people have, but there is not a typical response to loss, as there is no typical loss. Our grieving is as individual as our lives."

Our grieving is as individual as our lives. Although I'm glad that more and more fathers are being responsible and sensitive and communicative and open to healing when there's loss. It does take time, but take time for your families as well. They're there for you just as you're there for them.

At least that's the case with the hip cats I'm hanging around. Give us a hug, Beck. 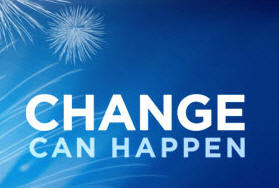