The greater crossroads of work, fatherhood and emasculation 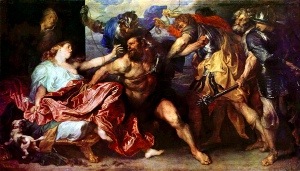 At first glance and enunciation, it sounds a man empowered.

After a week of working much harder for a lot less and topping it off with a day of daddy daycare with the toddler and infant girls, I am filled with emasculation!

But that's not it. Not even close.

It's actually more like this -- to deprive of strength or vigor; to weaken.

I know. Many of you out there are thinking, "Kevin, what are you talking about? Taking care of your children isn't supposed to be emasculating. You know better than that."

I do. I also know that there are many fathers out there at a greater crossroads of emasculation. These are men who have lost their jobs, who have struggled to find work and provide for their families, who have no idea how to adapt to an ever-changing global workplace -- now with more women working in the U.S. than men.

Some have embraced the new full-time and part-time stay-at-home daddy roles and I commend them for that. Mama sees it as a blessing that I've been able to work from home and help so much since Bryce was born.

But for too many others, it's been a very difficult road of plausible deniability, particularly when the resources aren't there for them to deal with the emotional reality while various kinds of abuses begin.

I can relate to those who have tried and still try to get a business working, as well as simply finding regular work. I am fortunate in the fact that I've developed my emotional intelligence and have learned to cope with change, chosen or inflicted.

It still ain't easy, though. And going back to that greater crossroads is the fact that too many men, who are fathers, are failing to respond appropriately to these changes.

On September 15, 2010 – one 24-hour period – domestic violence victim advocates served more than 70,000 adults and children and answered more than 20,000 emergency hotline calls. During the same 24 hours, more than 9,000 requests for services went unmet, largely due to lack of funding.

This from a new survey conducted by the National Network to End Domestic Violence (NNEDV) that reveals telling information about domestic violence services in the U.S.

Now, not all of these calls were about abusive fathers, but the facts are that a very high percentage of domestic violence incidents are perpetrated by men.

Though the economy does not cause domestic violence, factors associated with economic uncertainties can increase the severity and frequency of abuse. At the same time, options for survivors to escape can be more limited. More than 80 percent of local domestic violence programs reported an increased demand for their services while nearly the same number reported decreases in funding.

Those who know me know I'm all about gender-role fluidity, workplace equality, emotional self-awareness and management. That also means friends and family of those less so need to intervene prior to the dangerous greater crossroads that have fewer and fewer resources and safe havens.

If you've never felt the broken pride that leads to feeling less of a man and provider, then you have no idea what I'm talking about. It's not funny in the slightest -- it's frustrating, frightening, maddening and depressing. Socioeconomic change is always difficult, and for many men, it's an excruciating back-breaker.

Fathers and gentlemen, know this -- I've always got your back.

That way we don't eat our young 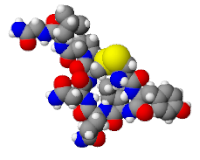 "How are we even functioning with such horrible sleep?"

Welcome to lack of sleep, part 2.

Again, sleep interrupted leads to wafer-thin patience and hallucination -- I dreamed of a Great White jetting through watery space right at me.

I awoke unscathed, but still...

So this morning as Mama rattled verbal sabres at the air around us and at a crying baby upstairs, all I wanted was to slip away into the garage to silence.

Then Mama slid upstairs to nurse a crying baby.

When she came back down she was all smiles and higher than a kite.

"Wow, that oxytocin does wonders."

Oxytocin, a mammalian hormone that acts primarily as a neuromodulator in the brain -- i.e., the "love hormone."

We should have oxytocin stations in every room, and on every street corner. Really.

That way we don't eat our young. Or each other.

Email ThisBlogThis!Share to TwitterShare to FacebookShare to Pinterest
Links to this post
Labels: crying baby, fatherhood, no sleep, parenting

We pray for healing anyway, because that could happen to any of us 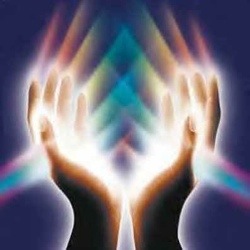 You think, never my child.

That could never happen to us.

But it happened to our friends, to people we don't even know.

First there's Julia. The sweetest little girl we have yet to meet whose mother I used to work with. She has Down syndrome and had heart surgery just this week. She was born with atrioventricular septal defect (AVSD), a congenital heart defect common with Down babies.

Then there's the sudden death of a dear friend's unborn child recently. Only 20 weeks in the womb before complications arose.

Then there's a talented musician cousin who's battle with brain tumors have taken quite a toll on everyday life since childhood.

And then there are the children I watch as a child advocate at a local women's shelter. Physically healthy children from varied backgrounds and socioeconomic strata who live with domestic violence and the emotional and psychological toll it takes.

That could never happen to us.

On the other side of the sandwich you think, never my parents.

There is mine whose health has been compromised for decades, both mom and dad, and now while my mother still heals from back surgery last Thanksgiving, my father has to have heart surgery for a second time this decade, hundreds of miles away...

We pray for healing anyway, because that could happen to any of us.

It puts many other worries into perspective, and one place to start the healing is to love each other and love your children.

The older son she held 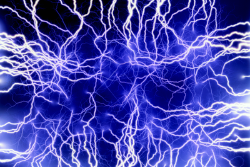 I could see it filling the room around me, could feel it.

Before she even said a word, her anger and fear surrounded her and her older son like super-heated static electricity, igniting the hair on my neck and arms.

It smelled surprisingly of misplaced guilt.

Her baby squirmed on my lap, howling as if in pain. He was only hungry, but she didn't know that. She held her older son close, tears in his eyes.

"What happened?" She asked, out of breath.

I could feel sweat bead on my forehead and above my ears. All I could think to say was, "He's only hungry. He wants his bottle. Remember, you said left it in the car."

She glared at me, then softened at her baby.

She set her older son down and picked up her baby, cradling him close.

"What happened?" She asked again. Her hands trembled. I imagined her striking me.

The other child advocate joined us. "Really, he's only hungry. He saw the other boy with the bottle and just started crying. That's why I came to get you. Nothing else is wrong."

I felt sincere knowing it was the truth, but it became a dark caricature of itself between us.

"He never cries like that unless he's hurt," she repeated, backing out of the room with her boys.

I struggled to focus my positive resolve and said, "I assure you nothing happened to him. He's just hungry and wanted the other boy's bottle."

The static electricity faded as she backed into the hallway shadow, but I knew she didn't believe me.

This is what abusive fathers have done to their families. This is why I'm a child advocate at a local women's shelter.

I was the older son she held. This is why I need to help the healing.

Nodding off to the couch time to come. Ack.

And the painful wakeful gaps get more frequent and longer...until I'm sleeping on the couch...and even that isn't helping Mama much.

A month ago we thought Bryce was hitting her three-month stride of sleeping more through the night. She was only waking up once during the night to nurse, sometimes twice, and it all seemed like downhill from there on out.

Then the melting snowball hit fresh snow and got bigger and bigger...

Waking four to five times per night isn't what we had in mind. Granted, she's far from colicky; we've heard from family and friends just how painful that can be. However, just five minutes of shrieking feels like forever.

But sleep interrupted repeatedly over time can take an emotional, psychological, spiritual and physical toll.

Big time. Especially on the Mama (but me too).

Beatrice had similar sleeping behavior around the same time. Thankfully though she moved past that and started sleeping through the night (post nursing at least). And now? Beatrice sleeps like a rock star training to be a teenager.

I don't want to fast-forward too quickly...

Oh, we love both our girls and know the sleep and lack thereof will pass soon enough.

Or, not soon enough as I blink sand from my eyes and yawn in the early afternoon, nodding off to the couch time to come... 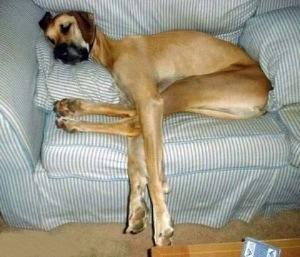 Email ThisBlogThis!Share to TwitterShare to FacebookShare to Pinterest
Links to this post
Labels: fatherhood, not sleeping, nursing baby, parenting

Day 2 of the Year Anew

Is about a lifetime with happy. 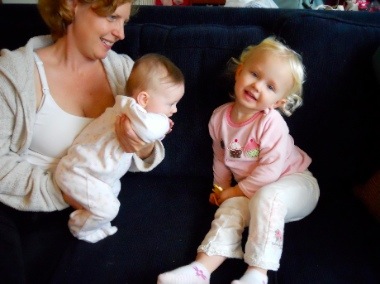 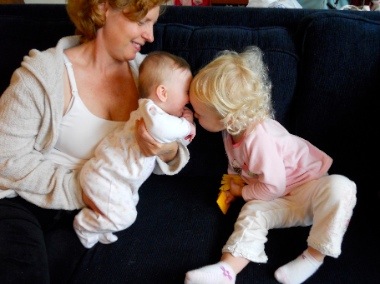