All before the shutting of the door.

Riding the Friday coattails of a happy tearful Jam-B day, Saturday morning was supposed to be more of the same.

Which it was, eventually, but not before the shutting of the door...

We were getting ready to head out for a run/walk along the ocean (pushing Beatrice in the jogging stroller) when I went out front to put the stroller in the car and tried to shut the door.

But something blocked the door. I thought it was this leather bag talisman we have hanging on the door know inside (ask Mama about that one), since it does tend to swing in between the door and the door jamb, but that wasn't it.

No, it was Bea's hand. At first I didn't even realize it because I didn't hear Amy say:

Fortunately her fingers didn't even swell up, although her vocal cords sure did -- from shrieking.

God, I felt so horrible. Frustrated and angry too knowing full well I needed to be checking for tiny hands every where there was a door or drawer to shut. I'm one of her parents, one of her protectors, and shouldn't be the cause of any physical pain.

An accident? Yes. Always preventable? No. Mine and Mama's emotional and moral compasses intact helping us make the right decisions in the aftermath? Most of the time.

We got out Boo-Boo Fish, this little plastic fish full of that blue ice magic that freezes, and that helped to soothe her as it usually does.

Then off we went on our morning walk! No harm, no foul.

However, that horrible feeling of hurting your child unintentionally is so hard to shake for most of us, except for the tragic exceptions we read about in the news -- those who's moral compass has rusted, it's moving parts frozen or broken -- like:

Yeah, this isn't stuff parents want to read, and it's a crappy segue to an otherwise sweet Beatrice post, but domestic violence and child abuse are issues I feeling strongly about bringing awareness to, and hopefully facilitating positive change for.

I received that news release via e-mail from the National Coalition Against Domestic Violence two weeks ago and it's been burning inside my head ever since.

It's not just the fathers either. Remember Andrea Yates?

The NCADV e-mail I received focused on the failure of our "system" that supposed to protect those in danger and the need for family court reform, but my point here is more about why what happens when and can it be prevented way before we get to alcoholism and addiction and mental illness and divorce and custody battles and vengeful anger and tragic, senseless deaths?

I believe more of them can be. Even with the sad fact that almost five children die everyday as a result of child abuse and many who survive are irreparably damaged, bringing more of the same destructive behavior to their future families.

There is hope. I broke the cycle of familial violence and abuse along with millions of other responsible, loving parents.

Accidents will happen. We'll hurt our children unintentionally and we'll feel like crap. We can educate, elevate and intervene to help prevent the intentional.

All before the shutting of the door.

A week away brought Daddy tears and Jam-B day!

Maybe. But it's certainly not a problem for me celebrating the loving moments of fatherhood. I can't even imagine those who don't.

Damn, I work too much -- hard-wired to my friggin' MacBook -- and was gone most of the week in Boston where I saw more snow that I've seen my entire life (although it was magical, because I don't have to live in it).

Missed Mama and B-squared terribly, more than usual this time. Everyday I talked to Beatrice on the speaker phone and asked her what a cow says.

That's currently her best cow, which is odd since there are some Baby Einstein DVD scenes with puppet cows that freak her out, like clown fear.

She actually ran into my arms with a smile that spanned the globe.

And that, ladies and gentleman, brought tears to Daddy's timezone-travel-weary eyes.

So began Friday Daddy Jam-B day! It's usually my work-from-home-watch-baby day and there's nothing finer than staying in your jammies most of the day.

"Beatrice, isn't it fun working in your jammies?"

Email ThisBlogThis!Share to TwitterShare to FacebookShare to Pinterest
Links to this post
Labels: work travel, working from home

Until we let the scary clown scream.

Beatrice has such a mellow disposition. She plays well by herself, with other kids, with other adults, with small woodland animals -- she's an all around honey and butter on the table sitting in the soft light of the sun's morning glory.

Until we let the scary clown scream.

If you haven't seen it, there's a Walmart commercial with a clown at a kids' party who steps on a toy unicorn and screams, scaring the children and scattering them while the mom's sit calmly acknowledging the disaster.

Both Mama and I knew what would come to pass, and we simultaneously thought "mute" and/or "change channel" - but the thought didn't fire quickly enough down the arms to hands to remote.

Turn off the TV and read books to her you say? Screw reading -- there's too much stuff to watch on TV! Plus, scary clowns build character, right?

[Tongue in cheek, you know. We love our little Bea...and TV. Oh yes, and books.]

Mercy, there's the toy clown from Poltergeist, Pennywise the clown from Stephen King's It, Flunky the Clown from Letterman, the Walmart clown, and so many more unspeakable horrors since (including the wooden puppet cow flying over the moon in one of the Baby Einstein DVD's).

It's a wonder kids still love the circus and crazy clowns piling into and spilling out from a tiny clown car.

Now, if we could only bring back the Town Clown from back in my day when childhood was all around honey and butter on the table sitting in the soft light of the sun's morning glory...

If we were no longer here: the elasticity of God-empowered DNA

At 16 months old, will she remember our Martian family vacashun?

Will she remember holding hands walking on the beach, bare feet treading the chilly Pacific?

Will she remember the animals at the San Diego Zoo and Sea World?

Will she remember going on her first amusement park ride with Daddy?

Will she remember Mama nursing her through her cold last week in the middle of the night?

My lifelong fascination with how the human brain works and how if plays out in our everyday behavior has been rekindled through the developmental "wonder fire" burning inside Beatrice.

The sheer number of neurons at birth -- firing, wiring and re-wiring -- and by 8 months of age a baby may have an astounding 1,000 trillion synapses in her brain!

Between reading How We Decide to the website Zero to Three to other brain development content candy bars, I'm seeking the knowledge of how and why.

Why, for example, don't I have any memories before the age of 5-6 years old, but my sister claims she does from as early as 2-3?

Most child development experts believe that short-term memory isn't fully developed until age 3, so the ability to store occurrences at any given moment with regularity is hobbled by biological development.

Barring any other predisposed genetic disability or physical defect, a loving and nurturing family environment helps to spur the healthy wiring and re-wiring.

Trauma hampers the circuitry to no end.

According to Zero to Three's Starting Smart:

At the Developmental Traumatology Laboratory at Western Psychiatric Institute and Clinics in Pittsburgh, Pennsylvania, researchers are conducting studies in traumatized children using the most up-to-date methods to study their stress circuits and brain development. In a recent report, they described their findings on maltreated children with Post-Traumatic Stress Disorder (PTSD) who they compared to healthy, normal children and to children with clinical anxiety disorders who had not been maltreated. Many of the maltreated children had been sexually abused beginning between the ages of 18 months and 7 years. They had also witnessed domestic violence beginning early in life, and some had been battered by family members. For most of the children with PTSD, the trauma was chronic, lasting for several years before the children were rescued.

Unlike non-maltreated comparison children, the children with PTSD had elevated levels of the stress hormones adrenaline and cortisol, even on a normal day when nothing especially stressful was happening (DeBellis, Baum, et al., 1999). Thus, these children’s stress systems seemed to be turned on even when they didn’t need to be. Especially high stress hormone levels were found among the children who had been abused for longer and/or had more severe PTSD. Very similar results have been found for children rescued from Romanian orphanages, even though for the most part these children had been severely neglected rather than physically or sexually abused.

Not surprising then on how PTSD played an unfortunate role in my development and my sister's, and the teenage/adult struggles that ensued. As I've said many times before, we need a helluva lot more purple elevate patches out there.

However, the elasticity of God-empowered DNA gives those of us who fight back a semblance of sanity, and in turn, the opportunity to break the cycle of trauma -- whether that's domestic violence, extreme neglect, even genocidal warfare.

And it favors the nurtured offspring.

This morning we woke Beatrice together as we usually do, talking with her and giving her hugs and kisses, singing her our morning song, and pointing out different icons in her room -- Pooh, Piglet and the flying bees that Amy's sister made.

This morning Beatrice pointed out my ears, mouth, eyes and nose, and then honked my nose. I asked her if her nose felt better ('cause here and Mama shared a cold this last week). She squeezed it and said, "Doe, doe, doe, doe, doe..."

Not that I focus on morbidity with any frequency these days, but this morning I also wondered if suddenly we were no longer here, would Bea remember us? Would even Bryce at this stage?

I'm going to buck the expert scientific trends and say, yes -- yes they would.

I'm crazy like that. I told you before it's the dope. 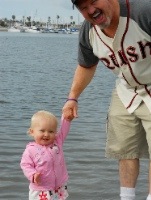 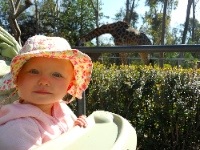 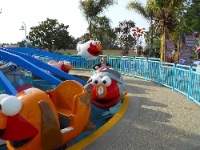