To Be Back Here Again 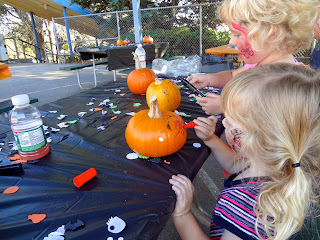 They laughed and decorated their pumpkins. A picture perfect Fall affair.

Her classmates and her sister Bryce sitting around her at the table kept laughing and decorating. An older boy sitting across from her, no more than eight or nine, smiled at her.

Such a sweet moment, I thought. I took a few pictures. It was the Harvest Festival fundraiser for Bridges to Kinder, the preschool where both Bea and Bryce attend.

Actually she stuttered a little. A vestige of her processing and speech delays and a work-in-progress with therapy, Beatrice stutters the beginning of sentences sometimes as a way to get her thoughts in order. It’s like saying, “Wait a second and I’ll tell you want I want to tell you.”

I handed her the gold pen and then the older boy did something I did not expect. He made fun of her stutter.

“Buh-buh-buh-buh I wanna a gold pen!”

The mocking face, the animated dance, the shrill inflection of his words — I remembered it well, being a giver and a taker as a child. Christ, sometimes as an adult. To date I hadn't ever considered this would happen; I had kept myself in the dark to this painful part of growing up.

Then her classmate and friend sitting next to her followed suit, although it was obvious he was unsure of why he did, and his taunt faded quickly with the uncomfortable confusion etched in is teasing echo.

I waited, not wanting to overreact. Bea seemed like she didn’t catch the sarcasm at all. Completely oblivious. Thank God, I thought. This time. Everyone at the table went on decorating and laughing as they had before, and yet I still wanted to say something. I fought it like trying to suppress a cough itching it’s way up an infected lung.

You little shit, I thought. You’re lucky she didn’t understand. A father’s overreaction to be sure, especially in the context I witnessed, but still.

But someday she will, and neither the Mama or me will be able to fend off the teasing, the bullying and other forms of verbal abuse, the unavoidable rites of passage. And we shouldn’t really, because Beatrice will have to learn how to deal with it, how to defend herself when necessary, and when to deflect, reject and accept. We’ll help her and Bryce both, encouraging the most healthy responses and defense mechanisms they can develop, and letting them figure out the rest, just as we did ourselves. Just as we all have done.

My flash of defensive anger woke me up to the fact that their journeys have only just begun. Kindergarten starts next year for Beatrice, and Byrce will start in a couple of years. To be back here with them again, to experience grade school to high school to college again — with them and through them — is quite the surreal sensation.

And while much of the teasing they’ll experience and even dish out will hopefully be harmless and roll of them and others, teasing unfortunately is a gateway drug to bullying and beyond. The beyond being things unthinkable, which is why coming back from my latest business trip and bought two bracelets by artist Julie Marie Chavez at the Life Is Good store. Julie's mission is to help some of today's most important charities: 25% of the gross bracelet proceeds going to support V-Day, a global activist movement to end violence against women and girls. This of course prompted me to get back to daddy writing and evangelizing for the better again.

Because I love you, girls. Simple as that.