Why These Fires Start

–twenty one pilots, Guns for Hands 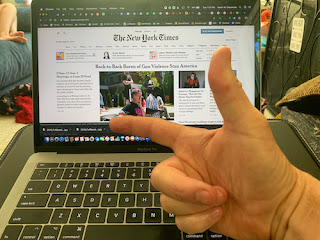 I almost brought the nearest to me to the ground; the two pops were loud and unmistakable. I flinched and knew in my periphery my oldest daughter was on my right and my niece and her baby daughter where slightly behind me on my left. And my wife was with our youngest daughter at the other end of the Santa Cruz Beach Boardwalk. How was I going to help them all?

I couldn't. And then I thought of part of my Kidpower self-defense training: when someone has a gun, you run. You run for safety as best as you can and get help as soon as you can. That most shooters aren't very accurate when people are running away from them, and police departments concur. That doesn't mean you won't get shot, but falling to the ground where you are can make you more of a target. And trying to fight someone with a gun pointing at you, which should be a last resort for those even with a modicum of training, could mean a quick loss of life.

All these things went through my mind seconds after the two loud pops. But they weren't gun shots – they were just balloons popping in one of the boardwalk games. Just balloons. I sighed and then we were on our way enjoying the day. I can't imagine what it's been like for real victims of shootings and their families.

The immediate fear was palatable, though. Especially considering that only a few days earlier there was a mass shooting at the Gilroy Garlic Festival. And for the first time we discussed shootings with our children, and what to do if it happens and how to stay safe. No surprise, it scared them, but it was still a necessary conversation.

Then came the weekend after, where two more mass shootings killed 29 people and injured dozens more.

That's now already 32 mass shootings in the U.S. this year (defined as three or more killings in a single episode).

There have been many arguments as to why this keeps happening in America, but one clear fact documented over and over again is that there are too many guns in this country with relatively unregulated gun ownership compared to the rest of the developed world. In fact, Americans make up about 4.4 percent of the global population but own 42 percent of the world’s guns. Combine that now with growing civil unrest, resurgent racism, simmering hate and fear being stoked by some of the very leaders who are supposed to call foul and unify us, and we have perpetual societal bonfires jeopardizing the lives of our families.

I say that because one of the many Kidpower instructors I admire (besides my wife, of course) inspired me with this analogy:

When we're literally on fire, we're taught to -- Stop, Drop and Roll -- to extinguish the fire.

In light of these horrific mass shootings of late, we need to keep our fears in check and work hard to be aware and prevent these societal fires from starting in the first place, including:

These being just a few of the Kidpower Safety tips for individuals and families.

And as American citizens, speaking truth to power about why these fires start in the first place and what we can do to prevent them through legislation and law enforcement is also our responsibility. We can and should be shouting from the rooftops about reducing the number of guns in our country and addressing the racist hate and destructive anger that's driving these mass shootings of late.

Speak up and be safe.
Posted by KevinWGrossman at 1:13 PM