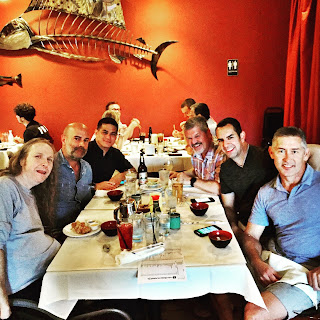 There we were on the power walk. Not the When Harry Met Sally Billy Crystal and Bruno Kirby overly-animated Central Park stride, but a power walk nonetheless. Moving at a nice four-mile-per-hour clip. Walking and talking along a creek in Chico California about knee surgery, staying in shape and hitting plateaus. We walked and talked, huffed and puffed, my friend Craig and I, and I thought, Wow, we just keep coming back, after all this time.

And for good reason as I've noted before in Men of An Unremarkable Age and Because That's How It Works With The Guys That Work. Being friends for decades isn't unusual, but it's usually more emotionally intimate for women than for men, especially over the long haul.

Usually, but we're an exception to the rule. Every year is like reliving a single point in time that solidified our emotional connections forever; we had all experienced a mutual metaphorical monster that forever challenged our sense of normalcy: one fateful spring day at a swim meet our senior year in high school.

My best friend Robby had wanted to go with a group of us to the coast instead of his swim meet, but we all knew he wouldn't miss his meet for anything. When we returned early that evening, we learned he had broken his neck and crushed his spinal cord on his third false start. We rushed to the hospital to see him, and his mother claimed we were family so we could see him in the ICU the next morning when he was conscious.

Three months later he was brought by ambulance from the hospital rehabilitation center to graduate with our senior class, and I had the honor of pushing him into the football stadium and standing by his side throughout the commencement.

Then five years later he moved to Chico and that's where we've been going to hang out with him ever since. Our mutual circle of friends had grown during high school and beyond, and since has remained more or less intact.

We waxed poetic this year, as we always do, with a sprinkle of family chat, economics, colonoscopies, politics, music and more, and added yet another year upon year that we make it a priority to congregate and elevate our connected spirits. Emotional evolution has looked kindly over us since junior high and high school, although we're not too mature to complete devolve into ranting, cursing, snorting, pig-like beings who flip through old yearbooks and comment, "Did you date her? She was really hot."

It's a controlled setting, though. One that we've sealed off from the rest of the world. One that no longer seeps into the groundwater of our daily lives, or worlds of work, or our families. More like a private swimming hole that only we can find one or two times per year, lost the rest of the year inside our tangle of low-testosterone time.

The answer to that is a resounding yes. Because we're here today, men of a certain age, an unremarkable age, who continue to invest in a friendship that’s seen many ups and downs, ins and outs, and others who have come and gone over the years. Men divorced and married, with and without children. Men who have experienced hardship and loss as well as success and enduring love. Men finally comfortable in their own skin and who be friends of years to come.

"Do you think we'll still be getting together when we're 70?" we ask each other.

The answer to that, like men knowingly bound to their future, is another resounding yes. 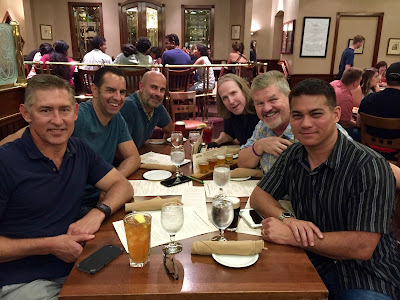 Posted by KevinWGrossman at 8:59 AM